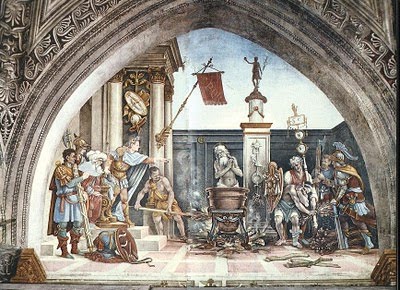 We celebrate the Fest of St John the Evangelist in May, rather than just after Christmas for practical reasons. May sees the ‘Feast of St John before the Latin Gate’, which seems a suitable alternative date. More about the intriguing story attached to this feast day below.

Why not come and help us celebrate? You’ll find our service times here

So – St John before the Latin Gate?

In the year 95, St. John, who was the only surviving apostle, and governed all the churches of Asia, was apprehended at Ephesus, and sent prisoner to Rome. The Emperor Domitian did not relent at the sight of the venerable old man, but condemned him to be cast into a cauldron of boiling oil. The martyr doubtless heard, with great joy, this barbarous sentence; the most cruel torments seemed to him light and most agreeable, because they would, he hoped, unite him forever to his divine Master and Saviour. But God accepted his will and crowned his desire; He conferred on him the honour and merit of martyrdom, but suspended the operation of the fire, as He had formerly preserved the three children from hurt in the Babylonian furnace. The seething oil was changed in his regard into an invigorating bath, and the Saint came out more refreshed than when he had entered the cauldron. Domitian saw this miracle without drawing from it the least advantage, but remained hardened in his iniquity. However, he contented himself after this with banishing the holy apostle into the little island of Patmos. St. John returned to Ephesus, in the reign of Nerva, who by mildness, during his short reign of one year and four months, laboured to restore the faded lustre of the Roman Empire. This glorious triumph of St. John happened without the gate of Rome called Latina. A church which since has always borne this title was consecrated in the same place in memory of this miracle, under the first Christian emperors.