As you enter the building from the main entrance, the Nave is the are straight ahead of you, the North Aisle is on your left. You’ll find a copy of this information on a printed leaflet close to the entrance.

Look towards the altar. The style is Gothic and the ceiling, marked by striking pendant and fan vaulting, is modelled on King Henry VII’s Chapel in Westminster Abbey, London. The original building ended just beyond the pulpit, where the stone arch is. The sanctuary was added on in 1882. A rood screen was put up in 1912 and removed in 1974, but the road cross which hung above can still be seen.

Turn left and walk into the North West corner of the Church.

Facing you is a stained glass window of Jesus as Pantocrator, flanked by angels. All the windows in the north and south aisles were designed by James Ballantine, his son and grandson. Some people consider the stained glass in St John’s to be the finest collection of Victorian stained glass under one roof in the whole of Scotland.

Turn right and walk up the north aisle.

There are a further five windows –

Between and below the windows are memorials to men killed in accidents at sea, the Boer War, and the Crimean War.

You come to the pipes of the organ – one of the last of the famous ‘Father Willis’ organs, rebuilt in 1903 and most recently in 2003.

Turn right and enter the CHANCEL up the steps on your left.

The Chancel was added in 1882. Its pulpit, choir stalls and oak panelling were carved in 1910 and based on the 1520 stalls in King’s College Chapel, Aberdeen.

At the top of the Church, the apse contains a reredos above the high altar made of Caen stone which repeats the pictorial symbols in the three stained glass windows above – Mary holding a lily and a book; Jesus with shepherd’s staff and Eucharistic cup; St John holding his gospel with his symbol the eagle at his feet, holding an ink horn in its beak. The large sanctuary lamp above the altar was designed by D Y Cameron, the well-known Scottish landscape painter.

On the wall to the right is a bronze and enamel memorial to Dean Ramsay. Next to the altar is a display case containing the model church given to St John’s by the Ethiopian Church to mark the return of the Holy Talbot in 2002.

Pause to look at the kneelers at the High Altar. These were made by members of the congregation for the 150th anniversary of the church. (1968) Discover the Light of God, represented by the sun and created earth represented by a succession of scenes: the moon, a primitive earth, the animal kingdom, the fishes and birds and humankind. Humanity’s contemporary environment is represented by agriculture and mining, science and shipbuilding, sport, education and the arts, computers, the threat of nuclear war, and the conquest of space.

The reverse side of the kneeler depicts men and women in their loneliness, kneeling before Christ on the Cross, from which His light shines on them.

Walk back out of the Chancel and see the communion table, made in 1984 by local craftsman Christopher Holmes, designed to show life and vitality in the form of trees rising from the ground. The matching chairs were presented in memory of Rosemary Mackenzie Ross.

Then turn left into the south east corner of the Church. You pass the lectern, in the form of the eagle of St John.

Bear left towards the Chapel. On your right is a sculptured group of the Holy family by a contemporary Scottish sculptor, Lesley-May Miller.

This was built in 1935. Above it is a window with St John writing his Gospel, with angels and symbols of the four Evangelists. The chapel itself evokes a sense of tranquility. Its east window shows Jesus praying by the Sea of Galilee. The regular-shaped pieces of glass and blue-green colours create the effect of seeing the scene through the sea itself. Kneelers here further represent the eagle of St John, the sea, moon and sun – wonders of creation.

Notice the wooden angel frieze overhead, where every angel is different.

Walk back towards the entrance door, passing the Font and the children’s area.

There are six windows on the south aisle.

Facing you at the end is a painting of the deposition from the cross, Dark Intervals, by the Scottish painter Ian Hughes.

You pass the display boards with information about the church and the Terrace users.

To the right of the porch you can find a bust of Dean Ramsay, who was curate at St John’s from 1827-1830 and Rector from 1830-1872. He did more than any other person of his day to promote ecumenical relations.

As you leave the Church, note the granite sculptures to the left (Famine) and the right (The Mark of the Nail) by local sculptor Ronald Rae. (Hand carved with hammer and chisel). Turn left onto the pavement and left again down the steps to the Terrace, where the former Church vaults have been converted into shops. Turn left at the end of the Terrace, and as you go up towards Princes Street, pass the Dormitory on the left, with memorials to the renowned painter Sir Henry Braeburn and Sir Walter Scott’s mother. Finally, on your right, is the Dean Ramsay Memorial cross, made of granite.

The table here shows the location of each window with a brief description of its content.

You will find information about the persons commemorated by each window on the plaques below, together with the Bible reference for each scene. 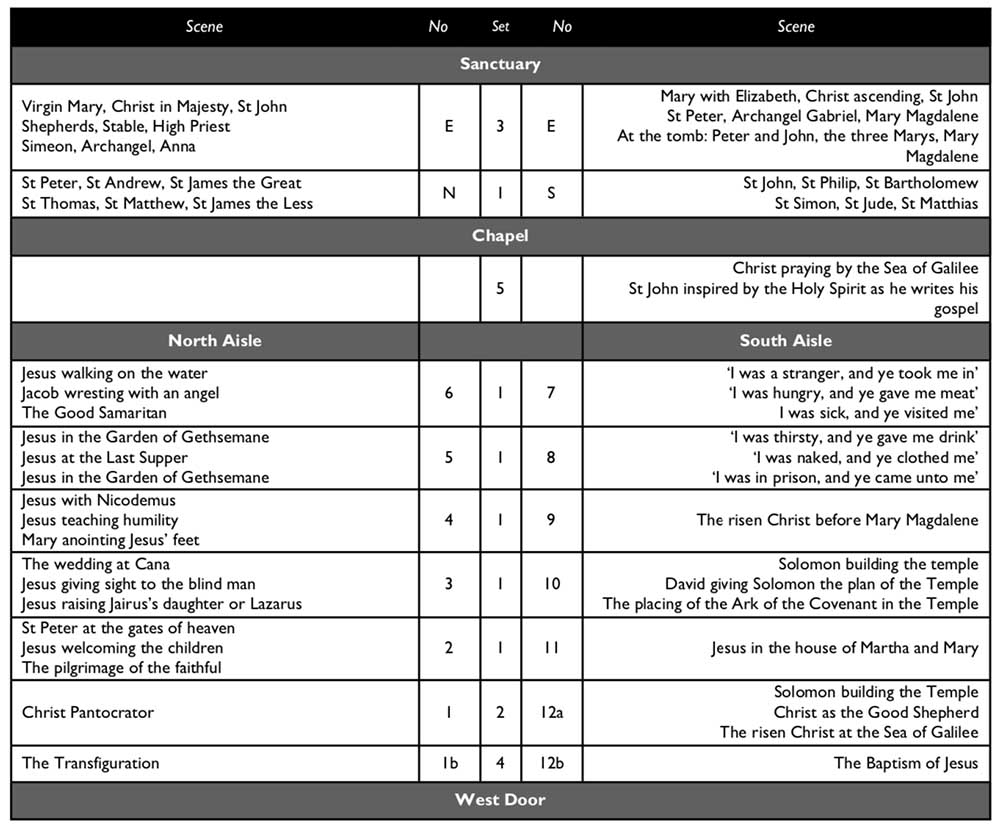 When St John’s was built and opened in March 1818, the aisle windows were infilled with clear glass and the east end (then flat) had a window which was literally painted.

The techniques and skills of making and using true stained glass had been lost because of changes in artistic taste and protestant theology. Circa 1850-55 the techniques of manufacture were rediscovered, and slowly the skills were developed to use them.

At this time the fashion arose of inserting stained glass windows as memorials, a practice which was accepted by the vestry of St John’s. In the period 1857-61 nearly all windows were filled with stained glass. Over the following 70 years other stained glass was inserted, making the whole collection one of the finest in Scotland, and especially notable because the majority were the work of one man and his descendants.

One studio, Ballantine and Allan of Edinburgh, made and inserted 10 of the 12 windows in the north and south aisles and the windows of the then flat east end. They are important and remarkable because the work was carried out over a short period soon after the rediscovery of the techniques of manufacturing medieval stained glass.

We are fortunate to retain these original windows because the Victorians liked to replace earlier windows with contemporary ones. Note the common features:

Ballantine’s son designed and inserted two windows, one at the west end of each of the north and south aisles. These have a very different style comprising pieces of glass, formal geometrical floral patterns, and colours not so bright and more in the “Arts and Crafts” style.

Ballantine’s grandson added the bottom panels of the two windows of Set 2.

Ballantine’s grandson designed and inserted the chapel window, using the same style for the window over the entrance arch.

All the windows were taken out in turn, cleaned and repaired by the Salisbury Cathedral Workshop.