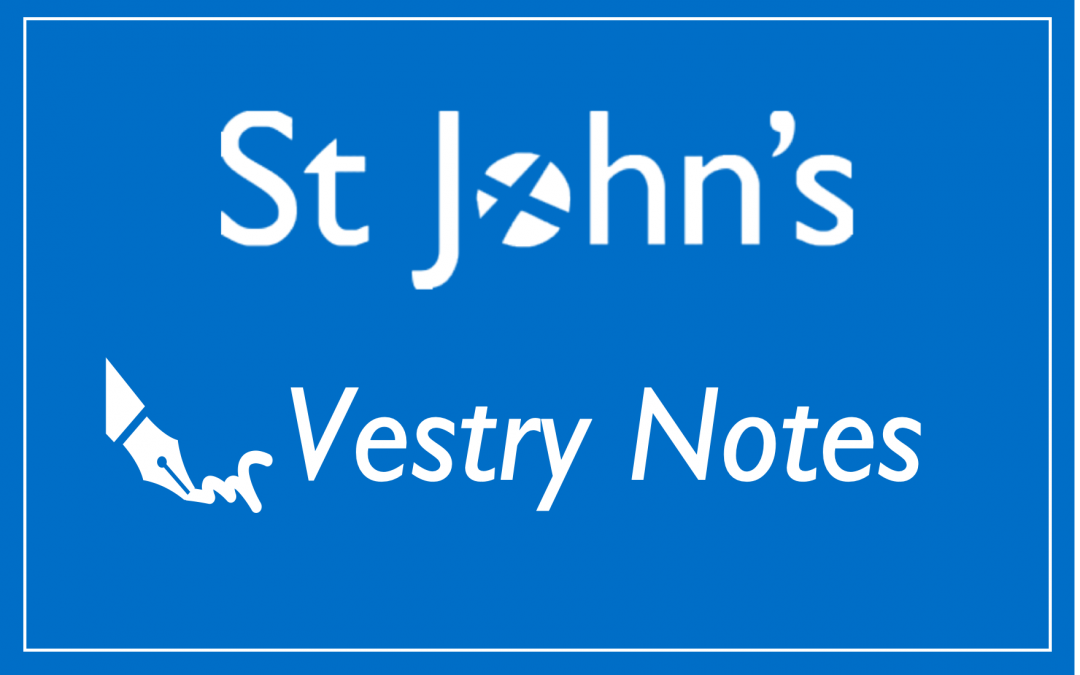 Risk Management
It was noted that a recession was probably on its way and this could be expected to affect the church’s income. In the meantime all efforts are being made to control costs and maximise income. Heating costs are a significant item so Vestry will consider a plan to reduce these costs at a future meeting. Finally, in relation to St John’s risk management, We thought a little about what issues the probable recession might pose for individual members of the congregation. Was that purely a pastoral issue?

Together
ECCCT had provided funding for the Big Green Food Fair, organised by our Green Ginger Group and representatives of the other 2 churches,  to be held at St Cuthbert’s at the end of September. This includes the costs involved in producing a Big Green Recipe Book, which will help raise money for food banks.

Operations
The church  and Cornerstone Centre are becoming increasingly busy with bookings. This, of course, brings with it the staffing needs and we discussed again the impact of this. The days of a fully staffed office 5 days a week and multiple vergers employed to look after the church and events taking place are well behind us. The role of volunteers, and potentially interns, was discussed. In the meantime Vestry agreed on the importance of the congregation understanding more about the constraints and pressures affecting our small staff team’s work.

Festival
Festival Pulpits have now been confirmed for August. Any Just Festival events will take place in the church rather than Cornerstone Centre, although no specific bookings have been made and Just have not yet no published a programme for this year.

Ukraine & Refugees
Salaam, a project of Edinburgh City Mission who are well experienced in working with refugees, are happy to work with St John’s. They have suggested that we think about what we can offer, whether on a one-off basis or continuing, and then they would work with us to facilitate that.

Collections
The best option for digital collection arrangements are still being considered.

Retiring member
Azeem is retiring from vestry due to a move of job; he has agreed to remain a member of the finance committee until the current audit is completed. Vestry thanked him for his contributions to the life of St John’s and wished him well for the future.

See a list of news items sorted by category: